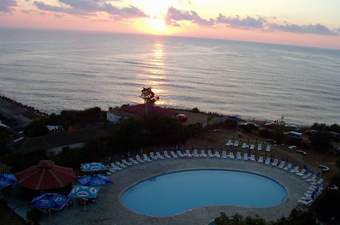 Kiten is village in the Southeastern pas of the country. It is located on 55 km away from Burgas, 5 km away from Primorsko and 12 km from Tsarevo. Near Kiten is located the estuary of the river of Kiten on a small peninsula of Urdoviza. Very interesting landscape forms are two picturesque bays – Karaagach and Atliman. The area is extremely beautiful thanks to combination of forest hills of mountain Strandja and the beaches. Kiten is famous with its beautiful and clear sandlines. The village has an ancient historical past. Near the Kiten is located could be seen the ruins of the fortress Urdoviza. It is ancient thracian sanctuary. There had been found a lot of artifacts, ancient anchors and ceramics. The fortress has been very well preserved until the end of 19th century. It is considered that the fortress was destroyed, because it was a port, which import with provisions for Troya. In the middle of 20th century, Kiten started to develop tourism. Thanks to the resources it has a good success. During 60`s, 70`s, and 80`s there were built a lot of bases, factories and etc. In 1962 Kiten has become a national resort. In the 90`s had been constructed 30 new hotels, a lot of rest homes had been reniewed. In 2005 Kiten has been declared as town. The attractions in Kiten are 2 beautiful beaches, a small yacht port which offers a unique opportunity to rent a small ships and boats for sea trip. The resort also has an excellent conditions for pracistising water sports, fishing, water ski and etc. The fishing in the are was the main occupation from ancient times. Near Kiten there is a beautiful camp Atliman. The area offers also a diversity of plant and animal species. There could be seen deers, water turtle, stag beetle, seagull and others. The plant species which has created the appearance of the resort are oak trees, cornels, poplars, cane, willow, wild vine. 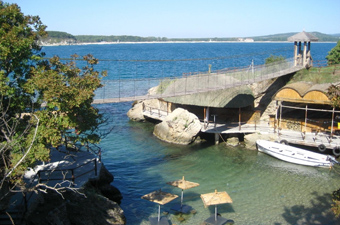 Burgas is city with important national meaning. During the last years it has become economical and culutar centre of South part of the country. If offers great tourist possibilities too. The city is located in beautiful Burgas Bay. You can enjoy beautiful landscapes and go for a trip in the area. Burgas is great for every kind of trips. You could easy rent a car from our offices in Burgas.

It is the biggest resort on Bulgarian sea coast. There are a lot of: hotels, luxury appartments, guest houses, luxury complexes, restaurants, disco clubs, pubs, aqua park and many others. It is very preferred because of the diversity of its night life.

In the past in was named Mesembria. It is considered to be one of the oldest towns in Europe. The history of the town began about 3200 years ago. Nessebar has successfully preserved a lot of historical and archeological artifacts. The old part of the town is included in the website of UNESKO.

The resort Elenite is near Sunny Beach. It is located in beautiful bay on the South part of Stara Planina mountain. There are hotels, guest houses and restaurants.

Ahtopol is a small town in the southest part of the country. It has great historical past and provides interesting and beautiful landscapes, and at the same time is quiet and wealthy.

Sinemoretz is a small resort village on the beach. It is located on Southeastern part of the country. It is extremely beautiful and offers a lot of attractions for visitors.

Ravda is a touristic village located 30 km from Burgas, 3 km from Nessebar, 5 km from Sunny Beach, St. Vlas, Elenite and 98 km from Varna. Ravda is international centre for children tourism and is great place for vacations. Ravda has become more popular among the tourists from another countries. The beach is wonderful and the weather is warm – perfect for relaxing holiday on the sea coast.

The best hotels in Kiten:

Rent a car in Kiten

If you plan to visit Kiten and have not booked your car yet, you can do it by using our reservations form. If you travel from Burgas, LowCostCars has offices in Burgas Plaza Mall, or on the airport, where you could take your car on Spot. Kiten is the perfect destination for trip from Burgas.