Travel with a car rental in Pomorie 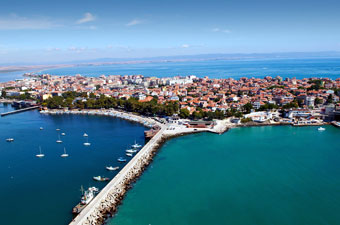 Pomorie is situated on a peninsula 18 km north-east of Burgas, and 408 km east of Sofia. The town is the third largest on the Black Sea coast after Varna and Burgas. There used to be a Thracian settlement here colonized by the Greeks in later times. A colony of the metropolis of Messembria was founded here in 5th century BC. The main occupation was fishing, mining and trading of sea salt. The shallow firth presented ideal conditions for that – it was where the first settlers discovered layers of salt in the sand. The ancient town was situated further inward onto the land in the area called Paleokastro where one can see its ruins scattered all over. It suffered barbarian invasions and in 8th century it was rebuilt by the Byzantine empress Irina. The town was intermittently under Bulgarian and then Byzantine domination It fell under Ottoman rule in 1453. After the Liberation the town regained its power but in 1906 the town burst in fire and nearly burnt down. It is known as a salt-mining centre; fruits and vegetables grow here; wine and tin productions are traditional for the place. Today the main occupation of its inhabitants is tourism. The mud-cure lake was discovered in 3th-4th centuries BC and was later called the Holy Lake by Anna Komnina (a Byzantine female writer). The first mud-cure establishment was built here in 1902 after the curing properties of mud unique for Europe had been proved. The mud is good for bone and muscular disorders, radiculitis, rheumatism, sciatica, lumbago, discal hernia, etc. Interesting sights are the old churches – the Transfiguration Church (dating back to 18-19th centuries has a valuable iconostasis and icons) and the Assumption Church (19th century). A stone bas-relief of St. Georgi is preserved in the St. Georgi the Victorious Monastery of Pomorie. A domed tomb-mausoleum (3th-4th century) was found in the area of Kouhata Mogila near Europa Camping. It is interesting for the construction resembling a funnel and is open to visitors.Regular town transport connects Burgas to Pomorie. Route taxis, minibuses and ordinary taxis run along the same route. Private water transport to Burgas and Nessebar can be used upon agreement. In case you do not like such kinds of transportation, our company offers cheap car rentals. Simply call us at +359 886 00 21 21, we can deliver it to any Black Sea resort. You can book your car for Pomorie from LowCostCars. We provide delivery to Pomorie, or you could take the car from our office on the Burgas airport, or at Burgas Plaza Mall.

The area offers a lot of sea resorts and sea villages, some of the are combined with green nature and hill relief. 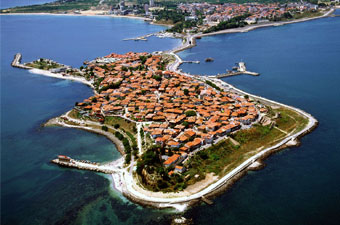 Burgas is beautiful city on the sea coast. It is in beautiful Burgas bay. There are a lot of possibilities of the big city, and at the same time is good for holiday vacations.

Sunny beach is the biggest sea reasort in Bulgaria. It has a diverse buildings for acommodation including: hotels, appartments, guest houses, complexes, and also a lot of restaurant, disco clubs, pubs, aqua park and many others. The resort is very preferred from young tourists, like the opportunities of night life.

It is historical and architectural reserve known as Old town Mesembria. It is one of the oldest towns in Europe, existing for 3200 years, it has been able to preserve a significant part of ancient structures and artifacts. The Old town is included in the list of UNESCO World Heritage site.

Elenite is resort near Sunny Beach. It is located on the south part of Stara Planina. It is in a very beautiful bay. There are a lot of family houses, a hotels, and also ultra luxury comlex.

Sozopol is a small town of 7000 people on the Black Sea coast, located 41 km south of Burgas. Near the town are also located the main Bulgarian resorts such as Dyuni, Primorsko, Kiten, while the distance to Varna is just 158 kilometers. You’ll decide to visit Sozopol if you want to spend a few relaxing days at the seaside without the crowds, who are typical for Golden Sands and Sunny Beach. The sea water in Sozopol also tends to be cleaner as it is further away from the Danube delta. Sozopol is divided into an old part and new part.

It is located near Primorsko and has rich historical past. The main tourists attractions are 2 very beautiful bays and a wonderful sand line.

Ravda is located 30 km away from Burgas, 3 km from Nessebar, 5 km from Sunny Beach, Sveti Vlas, and Elenite and 98 km away from the city of Varna. The resort settlement of Ravda is an attractive destination for those who wish to have a rest at a peaceful seaside with the warm climate of Bulgaria and the numerous sunny days. Ravda used to be an international centre of children tourism and vacation, and within the last years it has become more and more popular among the tourists coming from Bulgaria and also from other European countries. The village is also popular for its college and school campus. It attracts a lot of students from few countries.

The best hotels in Pomorie

If you plan to visit Pomorie and have not yet booked your car, you can do so by using our reservations form. If you are traveling from Burgas, LowCostCars has office in Burgas Plaza Mall, or from the airport, where you can pick up your car on the spot. Pomorie is the perfect destination for a trip from Burgas.