Travel with a car rental in Rusalka 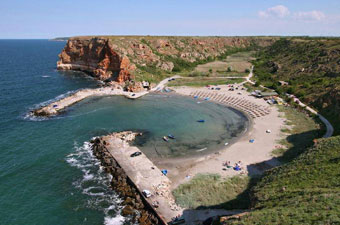 Vacational village Rusalka is in northeast part of the country, 90 km away from Varna, near to town Kaliakra. The village is built in 70s of the last century in „Bird Bay” (famoust also as Taukliman). It is built on model of french resort „Club Meditaranee”. „Rusalka” has a great nature, clear air, wonderful beach and sea, away from commercial tourism. The complex has about 500 villas for accommodation, every with it own toilet and a bathroom, and sports and fun facilities offer a great possibility to spend a wonderful time. Rusalka is near famous Thracian Cliffs golf and Black sea Rama golf, Balchik, Kavarna and Albena. In the area are found archeological discoveries, which are evidence for a human presence more than 8000 years ago. There are ancient fortresses, cave tombs, cave and sacrificial stones, which are center for scientists from all over the world. You can rent a low cost car with direct delivery to your hotel in Rusalka or to rent it in Varna.

Tourist monuments and sightseeing around Rusalka

The reserve Taukliman – “Bird Bay”. The area is known with small beaches, small islands and a highly cave in the cliffs. It is believed that the cave were used for living, and later as a sanctuaries for thracian, Romans and Byzantines. The most beautiful of them are located in the high par of Taukliman, and are nameed with names as : Golyamata maara, Temnata dupka, Aragonitovata cave, Iglenoto ear. The Tuzla lake, which is located in the area is mandatory to visit, because the bottom is covered with healing mud hydrogen sulphide. The region is ornithological heaven, because there the birds stop when they travel to Via Pontika. Here you can see a lot of birds like seagull, geese, Breguet runners, plovers and others. Besides these permanent asylum in the muddy pond and covered with dense vegetation slopes found protected species – owl, long-legged buzzard, great olive warbler and reptiles – zmie lizards, wall lizards, Spur-thighed Tortoise.

Cape Kaliakra is declared for a natural reserve. At first it is famous with the legend of 40 maidens which has tied their hairs, preferred to jump into the sea, instead of be in turkish hands. The area has been ihabited by the Thracians from 4th century BC. Later in Hellenistic age there was built a fortress and internal and external city. Nowaday you can see the ruins of the fortress, beautiful cave and a nature. The cape is wonderful for watching a dolphins or different kind of birds.

The area is declared as a national archeological reserve in 1989. The reserve is 2 km away from Kamen Bryag and 18 km from Kavarna. It is a terrace with size of 300 acres, separated by the sea from rock massifs. There was found a cave „town“ with 101 homes, dating from 5000 years BC. The northern part has been preserved early Byzantine fortress from the late 5th century, partially preserved towers and four gates. In the Middle Ages the caves were used as a monastery complex.

Balchik is famous with the palace of queen Maria and a Botanical garden. It is small and beautiful town on the sea coast, 40 km away from Varna. There are 2 golf courses near Balchik.

The best hotels in Rusalka

If you plan to visit Rusalka and have not yet booked your car, you can do so by using our reservation form. If you are traveling from Varna, LowCostCars has office on Tsar Osvoboditel 17A, or from the airport, where you can pick up your car on the spot. Rusalka is the perfect destination for a day trip from Varna.